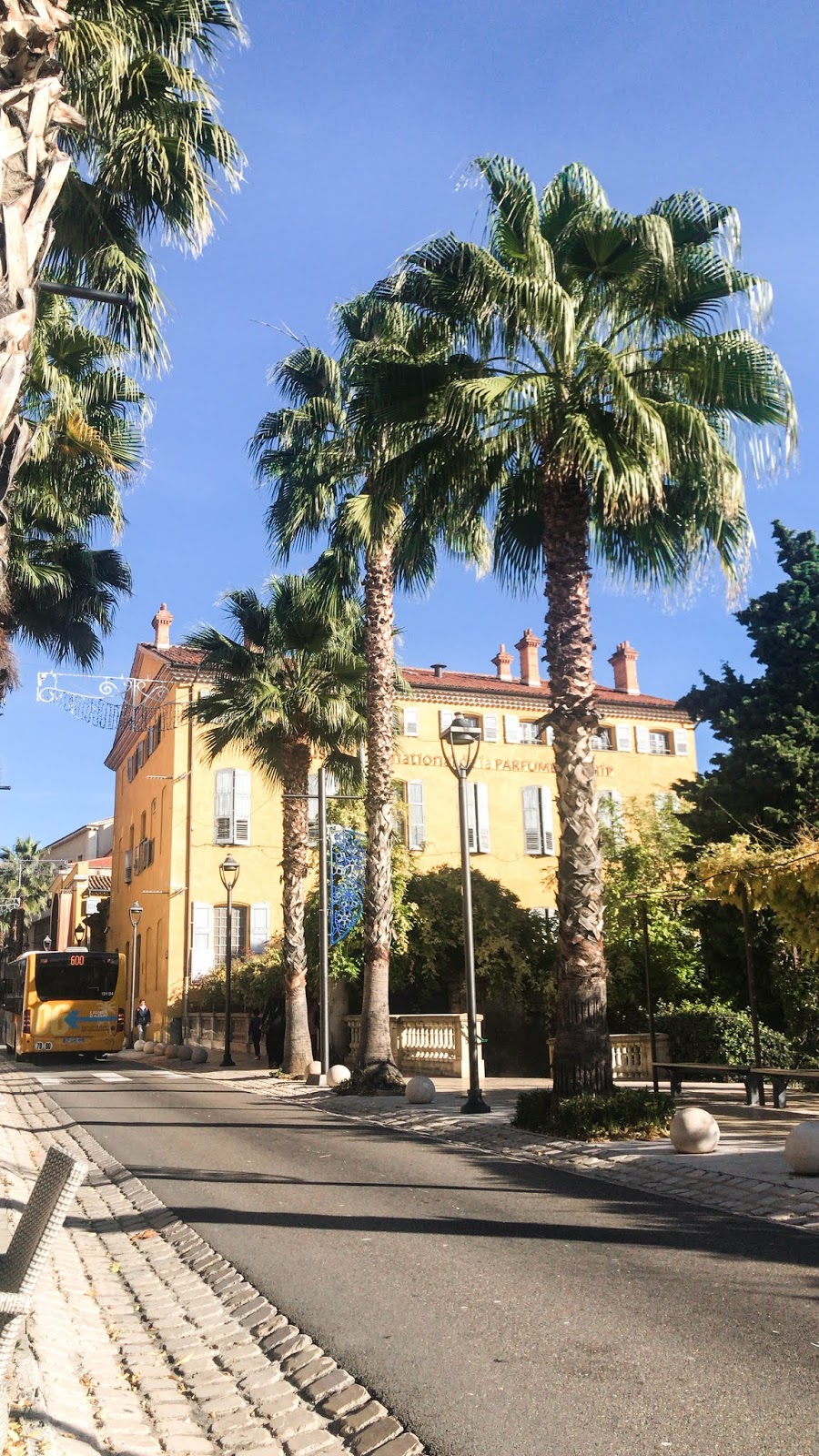 First of all, Merry Christmas! I hope you all had an absolutely wonderful holiday filled with festive cheer, quality time with loved ones and just a bit too much champagne.

Now back to your regularly scheduled (lol lies) content, I’ve finished up the second part of my France series and even though I’m quite biased, I have to say this week was probably the most interesting, activity wise. I haven’t gone into a lot of detail regarding the actual purpose of my trip to France so allow me to enlighten you. I am getting a degree in Beauty and Fragrance Marketing, and the trip was an opportunity to study fragrance overseas in one of the perfume capitals of the world: France, more specifically Grasse. We started the trip in Lacoste because my college has a campus there, and utilized the first week to learn the background of the fragrance industry, as well as an introduction to the production side of the industry. The second week, Grasse, mainly focused on production and creation, and the third –soon to come– in Paris was about marketing.

We started our perfume excursion at Fragonard, one of the top perfumery houses in the world. We began our tour of their factory and facilities with a creation workshop in which we all created our own Eau de Toilettes. We were given a number of essences with experiment with and were aided with the ratios until we found a concoction that spoke to our individual noses. Each EDT was put into little glass bottles provided by Fragonard, at last, we had a fragrance to take home. 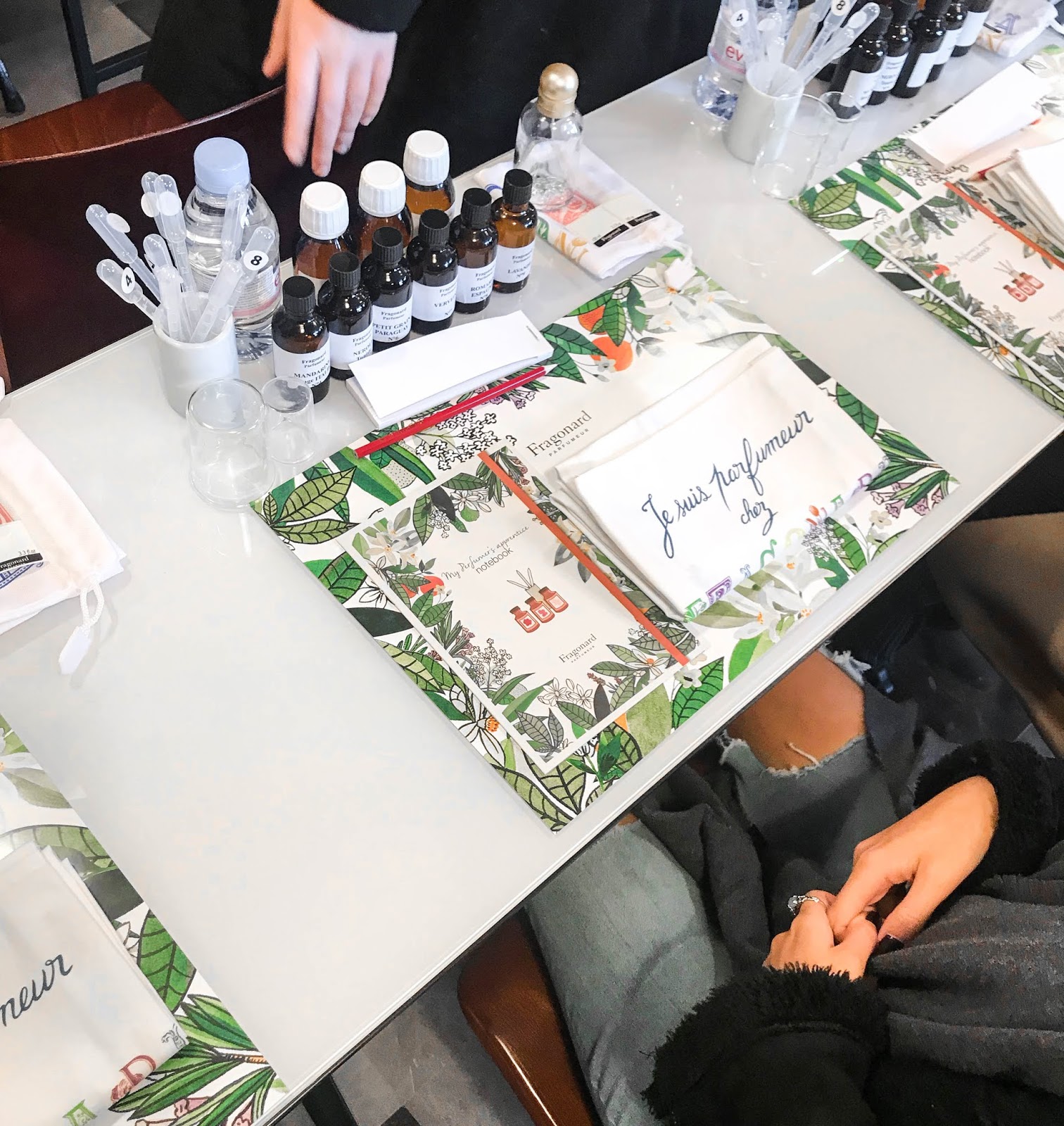 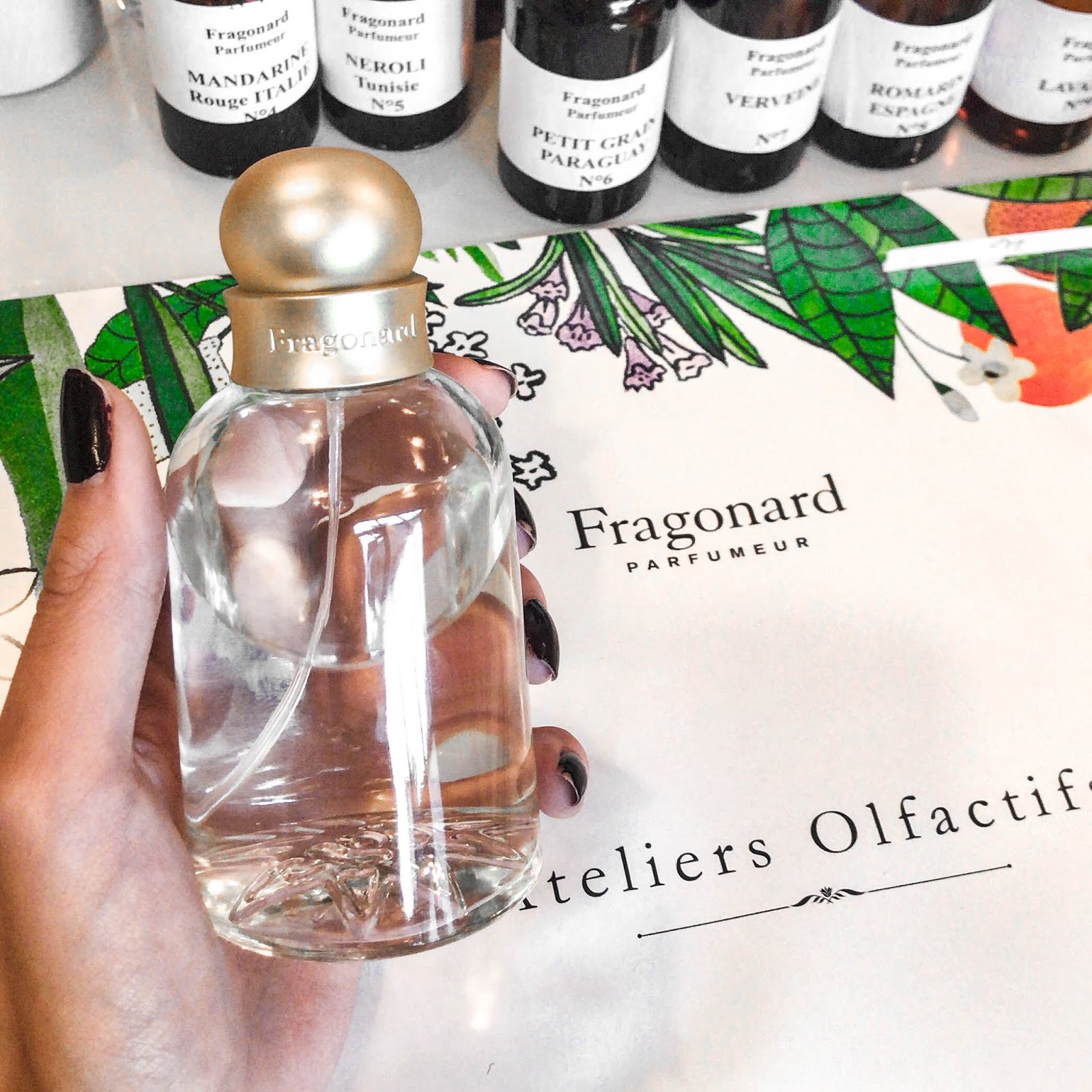 After the workshop, we began the tour of the facility which included a small museum as well as their first factory which is still semi-functional. We were taken through the process of distillation, as well as where and how they gather their ingredients. We got to see the processes of machine creation, which satisfied a deep part of my soul because I’ve been a lover of the “How It’s Made” show since I was a little kid. We finished up in the gift shop (gotta make that $$$) where I proceeded to spend way too much money on beautiful perfumes under the justification of a fleeting opportunity I may never have again. 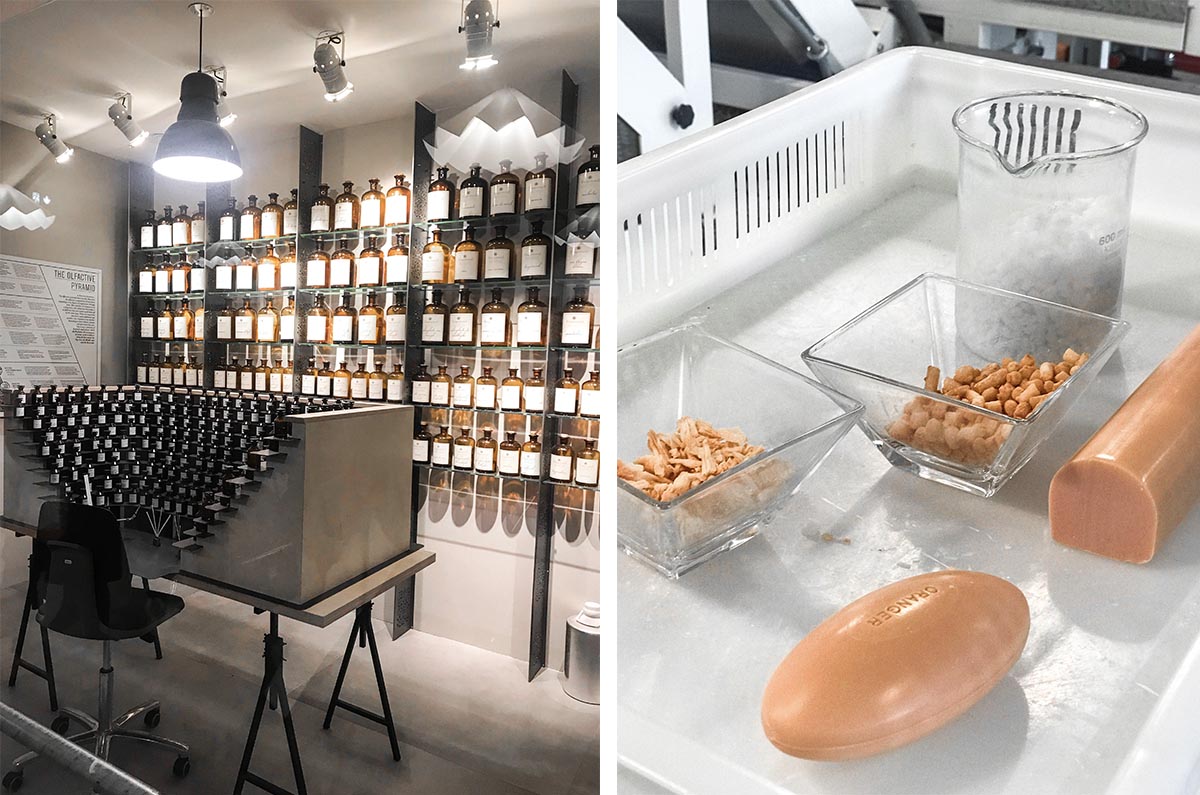 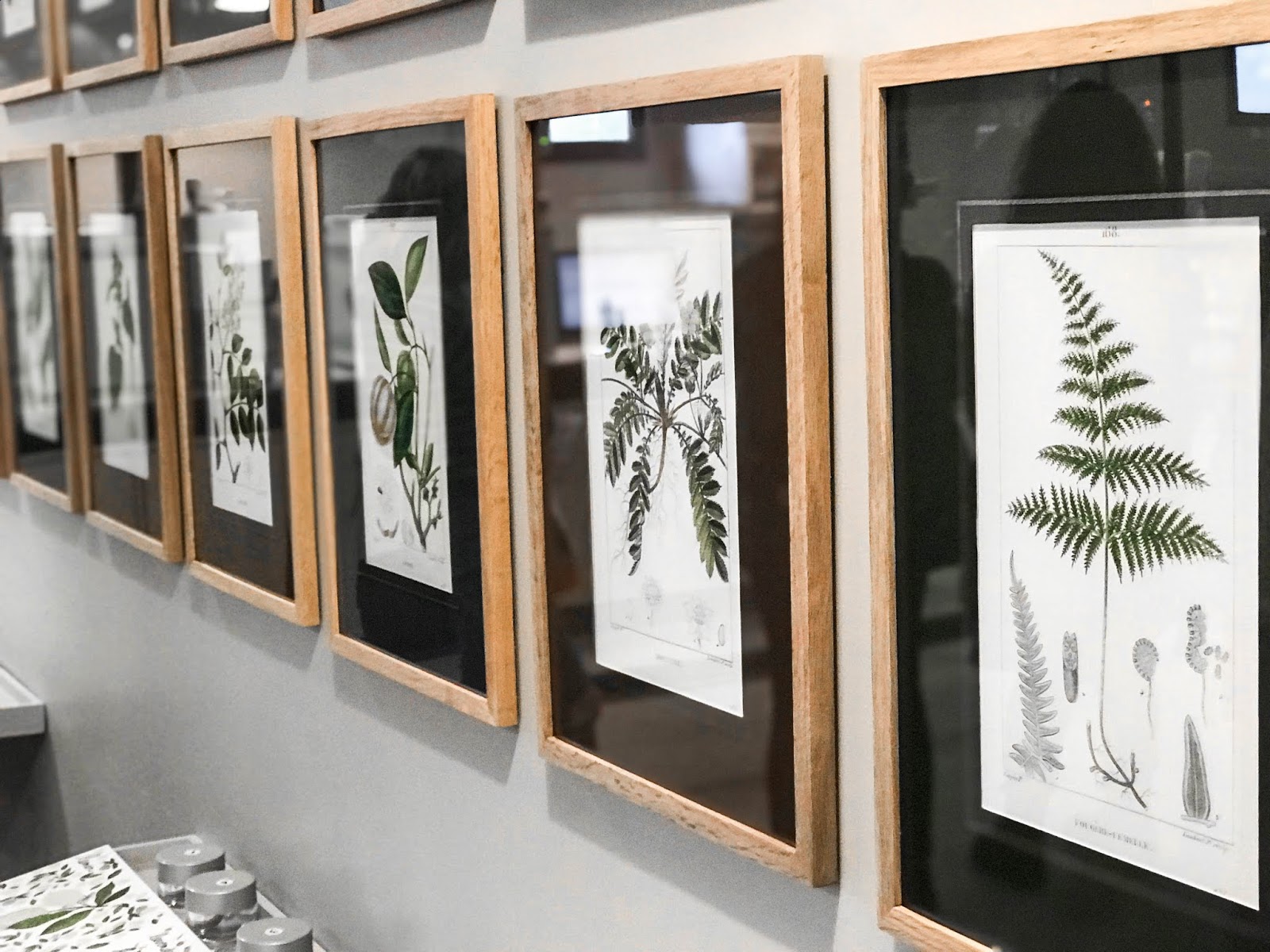 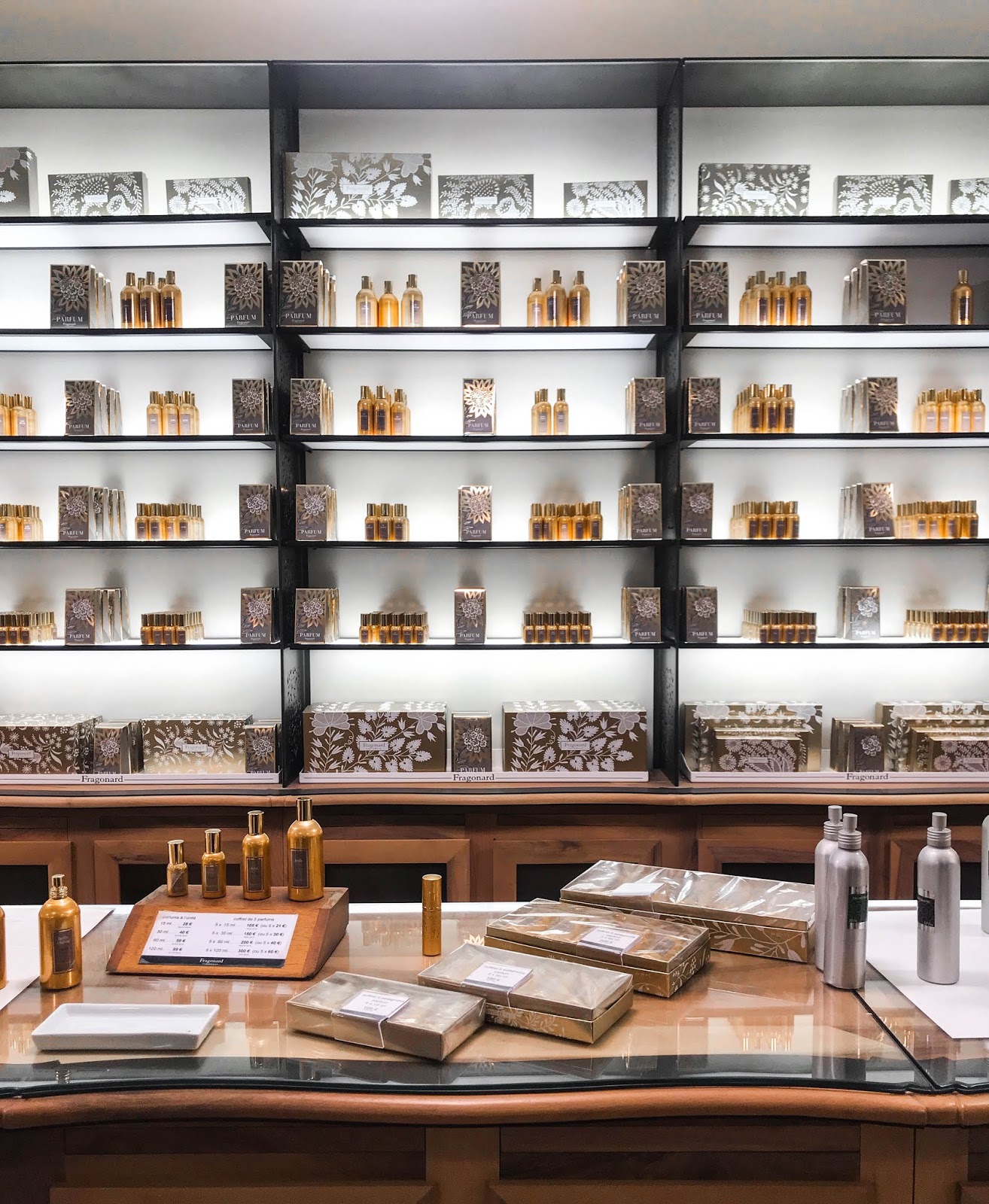 Galimard
On our second day in Grasse, we started with a visit to the Museé International de la Parfumiere. As a certified history nerd, I find very specialized and selective museums the most interesting to visit because they usually offer the most in-depth education of a topic or person. I also find that museums dedicated to a small field offer knowledge that you may be able to find anywhere else. The museum houses a small greenhouse, in which there are samples of the exotic plants that can frequently be found in high-end perfumes. They also had a large display to showcase the decades of evolution in style that is reflected in hundreds of different perfume bottles. I’ve always found it fascinating how much world events and pop culture affected packaging, both primary and secondary.

After the museum perusal, we headed to the Galimard factory for another tour and workshop. After the first workshop at Fragonard, I thought I had a pretty in-depth idea of how the creation lab would go, but I was pleasantly surprised by an experience that only mirrored the first in a few base-level aspects. 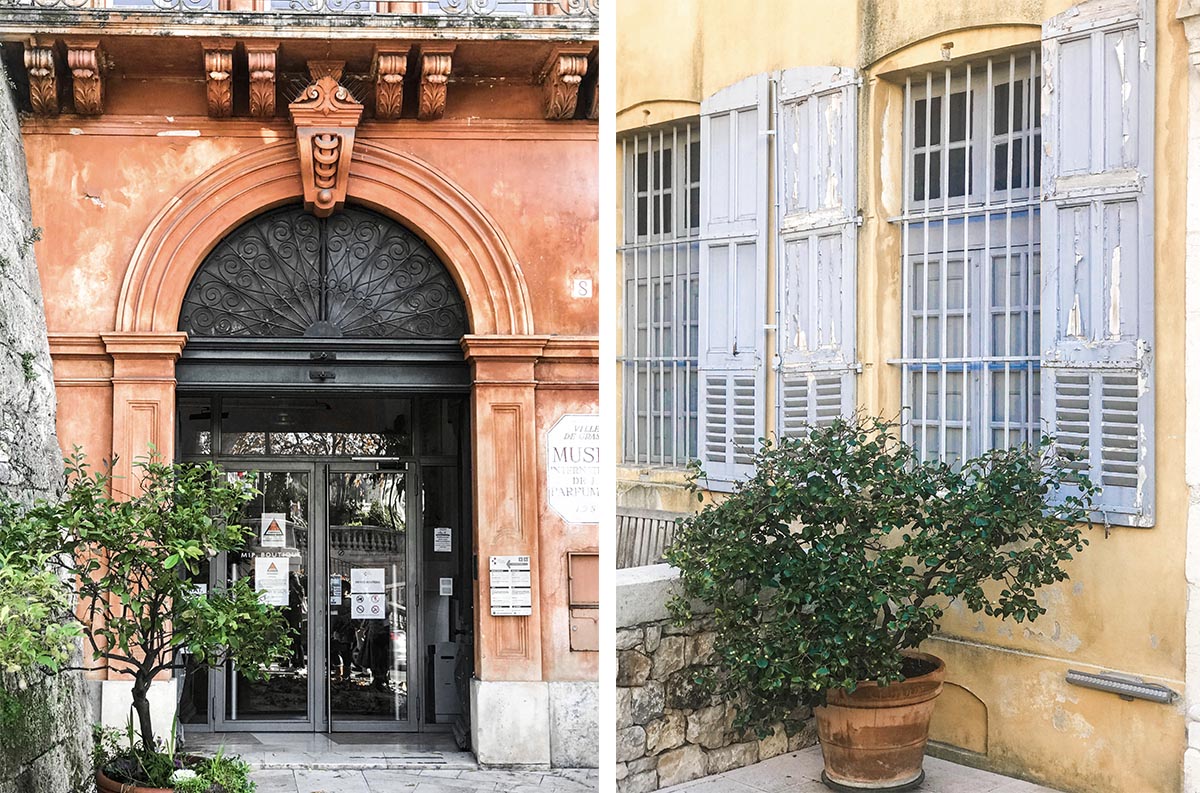 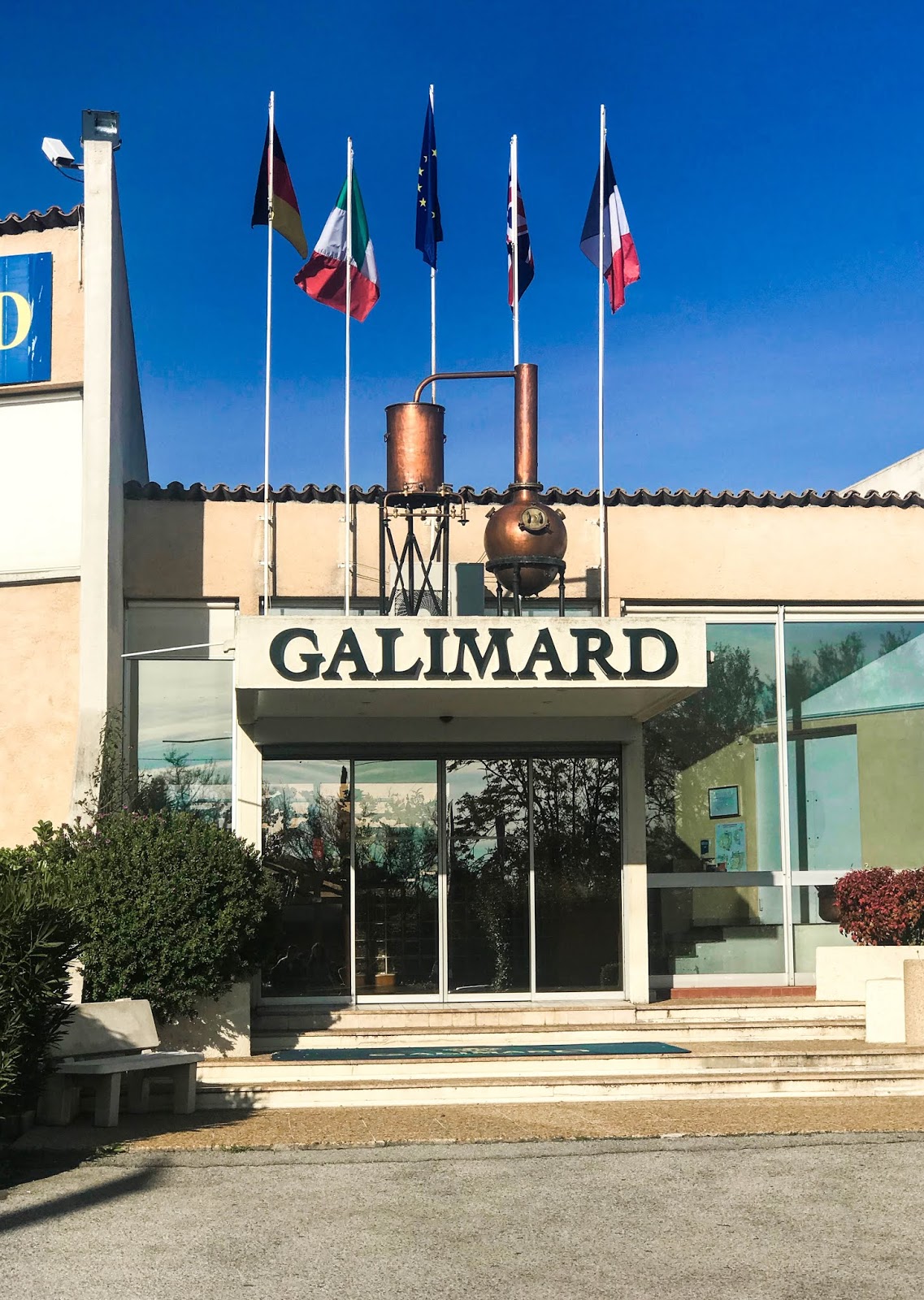 The entire set up of the second lab was much more scientific and literally laboratory-esq, whereas the first felt like a classroom. Both vibes of the environment carried over into the way that the labs were run because while the first felt like more of an educational opportunity, the second was purely a “take what you’ve learned and run with it” situation. I found certain aspects of the second lab more interesting –one of which is the number of essences we were given to play with– but I also found it a bit overwhelming. I’m the kind of person who gets a bit flustered when there are just too many choices, and I found that character flaw to come into play when I was seated at the perfumer’s organ. We probably had around one hundred different essences and that was enough to make my head spin. Hats off to professional perfumers because they can up to three thousand essences on their organ and a time. I think I would just combust at that point.

Something I really enjoyed about the Galimard workshop was they had a whole team of perfumers working with us, offering advice and giving suggestions to different essences based on what the general theme of our desired scent. After we finished creating the perfume, they were bottle up in the packaging of our choice and labels were printed with the names of our scent. It overall felt like a very complete and professional experience. 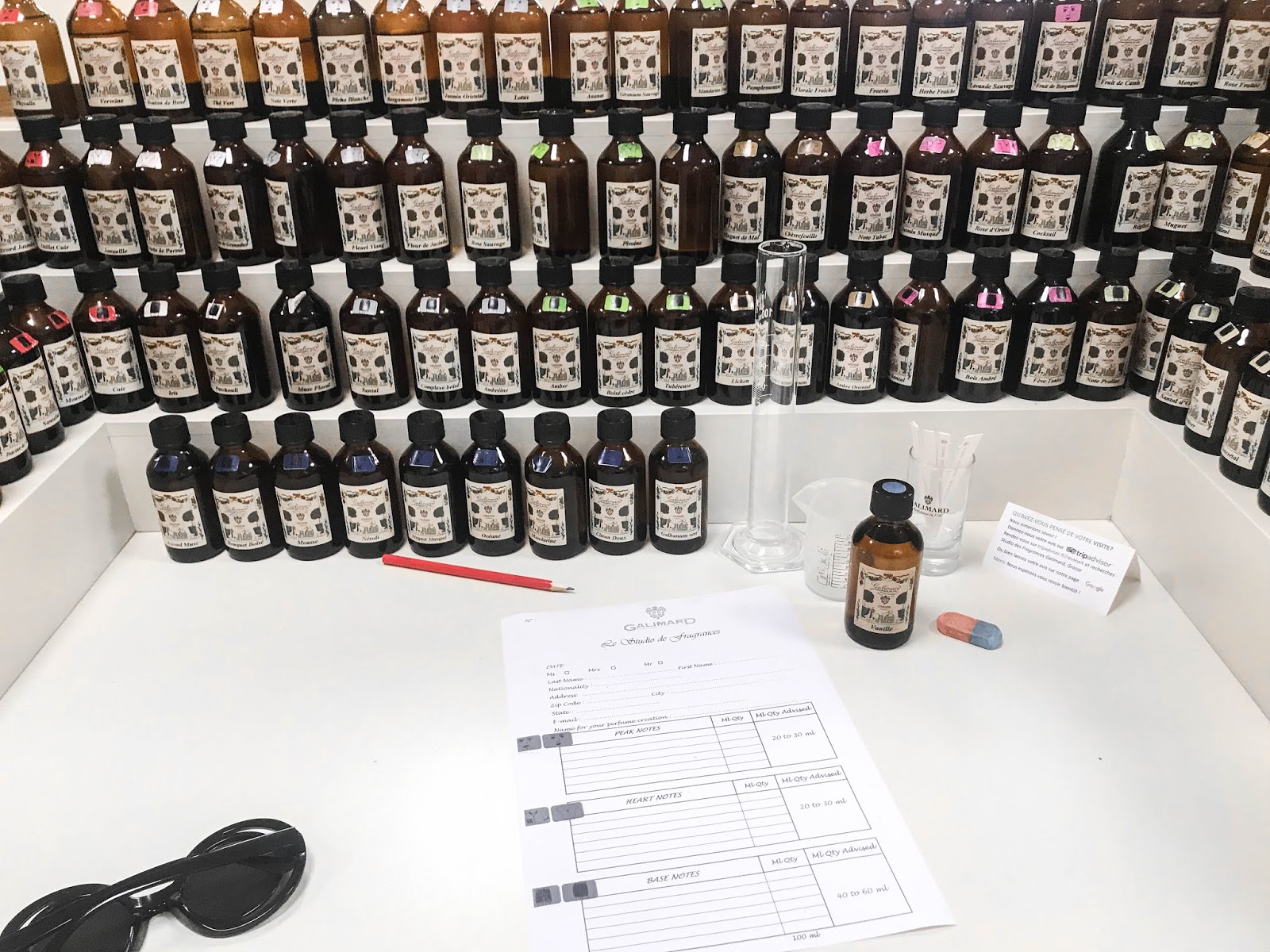 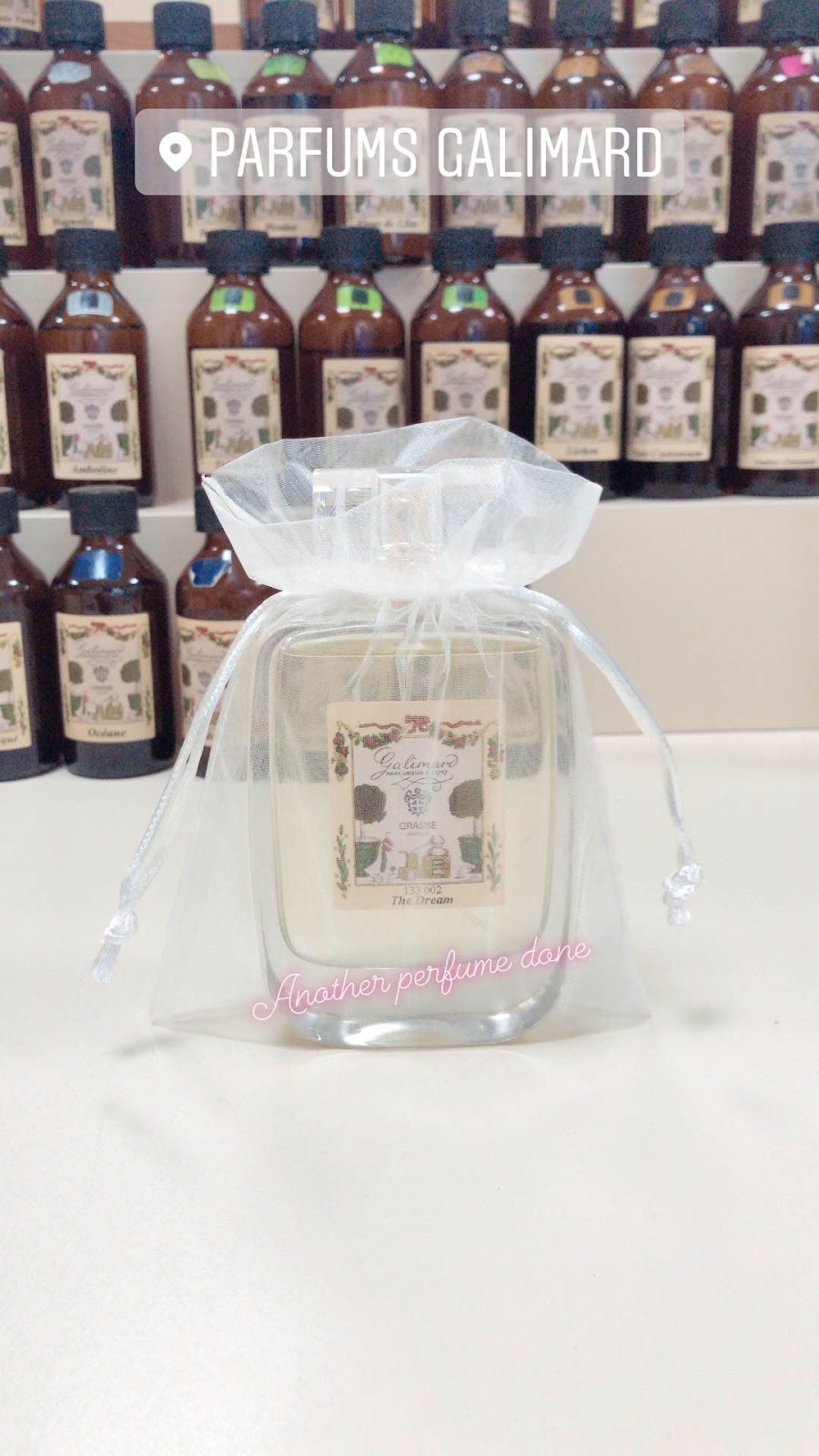 On our final day in Grasse, we ventured back to the Museé International de le Parfumiere for the third and final creation workshop. This lab was probably the most restrictive of the three with only a small handful of ingredients for us to choose from, but I think it still brought a valuable lesson to the table. While each of our scents may have been created with almost the exact same essences, with one two or three variations, the difference in rations and combinations made it so every single scent was completely one of a kind. From there we headed to an independent perfumer, 1000 Flowers. I enjoyed speaking with the entrepreneur, Jessica Buchanan because, after a few days of only absorbing the industrial side of the fragrance industry, I found the small and even artisanal side to be a breath of fresh air. Something I’m hoping to practice more frequently when I have a steady income and could even classify myself as being financially stable (that’s the dream, right) is to support independent brands, especially those run by women instead of giant mass-market companies. I picked up two of her scents in the 30 ml travel size: the first being Ode, which is actually more suited for men which I enjoy because I often because I gravitate towards warm, masculine scents and the second Pink Pepper Wood, which is nothing like anything I’ve ever smelled before. It manages to be very feminine but relays heavy woody and spicy notes that make it a bit feisty.

All of our perfume activities ceased by early afternoon, and then it was time to play. We made the half an hour journey to Cannes, and spent the afternoon and evening shopping, eating and enjoying the general bougie atmosphere that seems to radiate off of the streets. It was in Cannes that I decided under no circumstances in the future may I ever be less than impeccably dressed grandma. Seriously, the woman there of all ages were decked head to toe in the most beautiful and trendy fits, something that put to shame the entirety of American fashion standards. We have a lot of catching up to do. 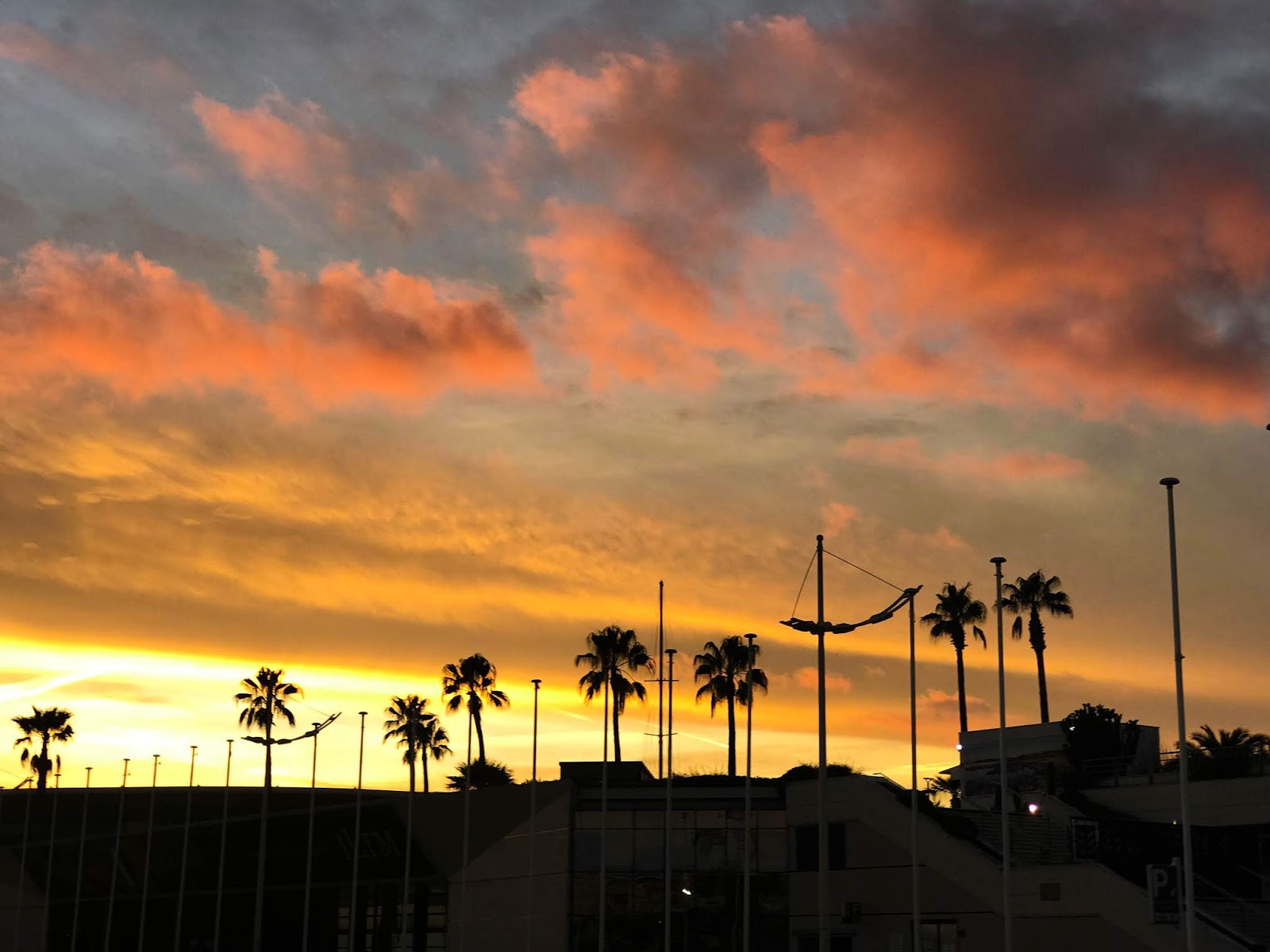 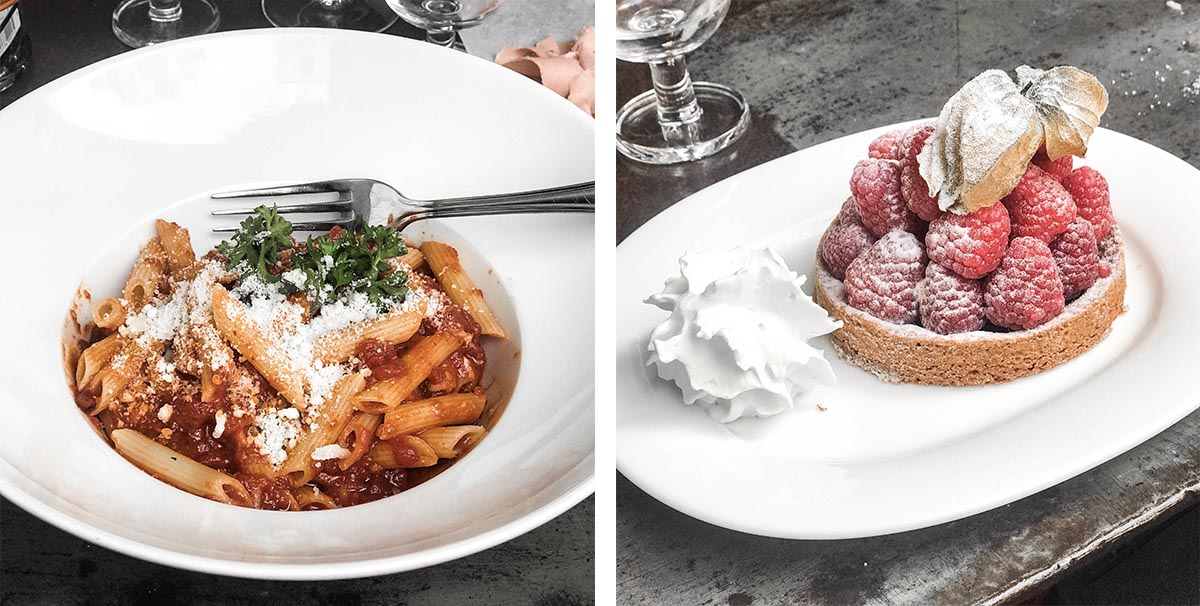 Returning to Lacoste and Apt
The weekend arrives and we made our way back to Lacoste, a drive that took much longer than I was expecting because I slept through it the first time. Our Friday held classes again, as we prepared to finish out the curriculum the next day. Saturday the 8th was a particularly special day in my heart because I turned twenty! I usually write a full post about my birthday, and maybe I still will, but I think for the moment it has yet to sink in. I’m stuck between it feeling quite anticlimactic but also surreal, two polar opposites. My celebratory twenty-four hours started with my final presentation for my class going better than I could have even hoped. We then went back to Apt for dinner attended their winter festival. Through all of the beautiful flights, people parading and explosions of fireworks, I had a little moment where I stopped to take it all in and just for a second, I let myself pretend that all of it was for me. 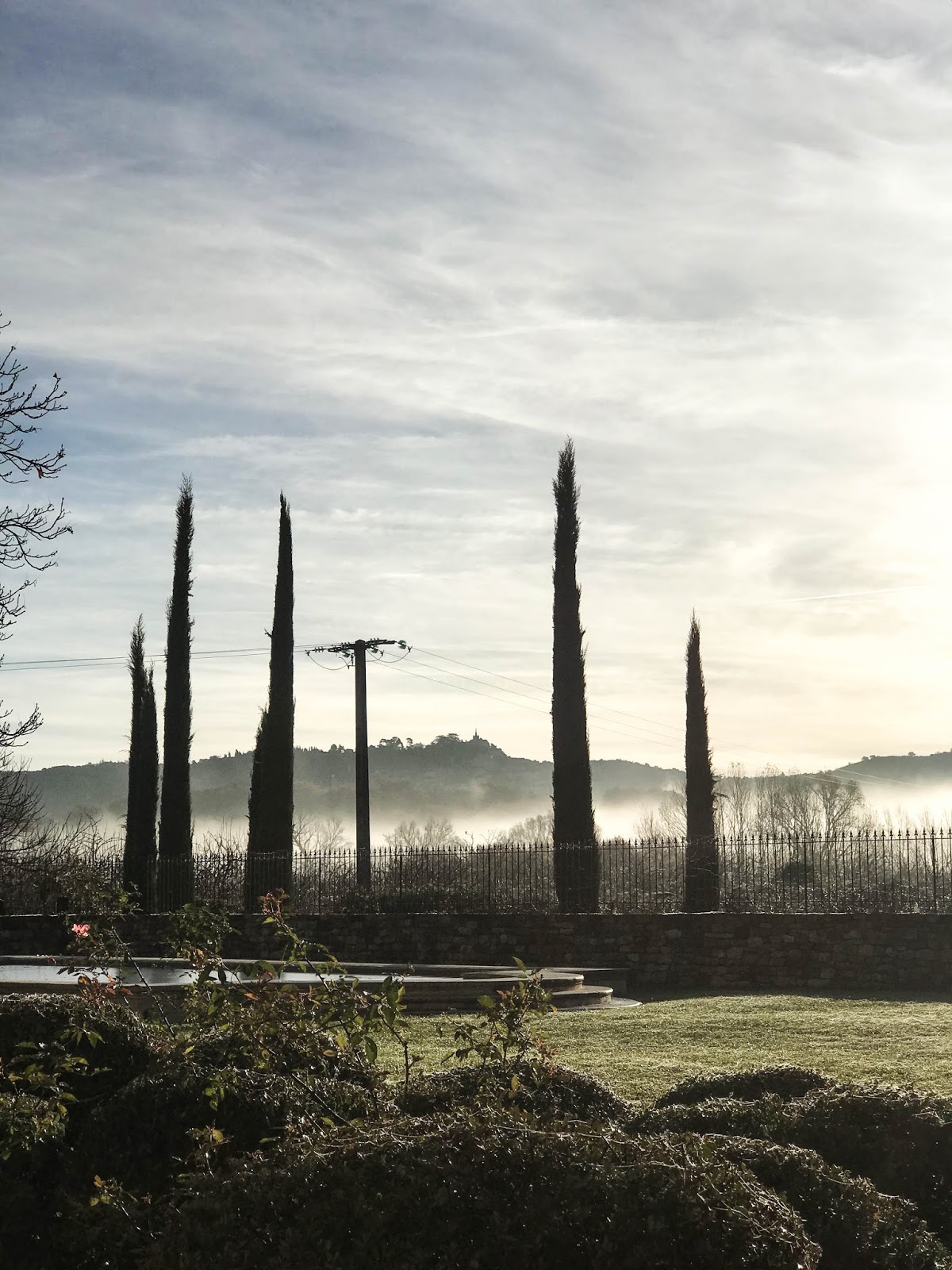 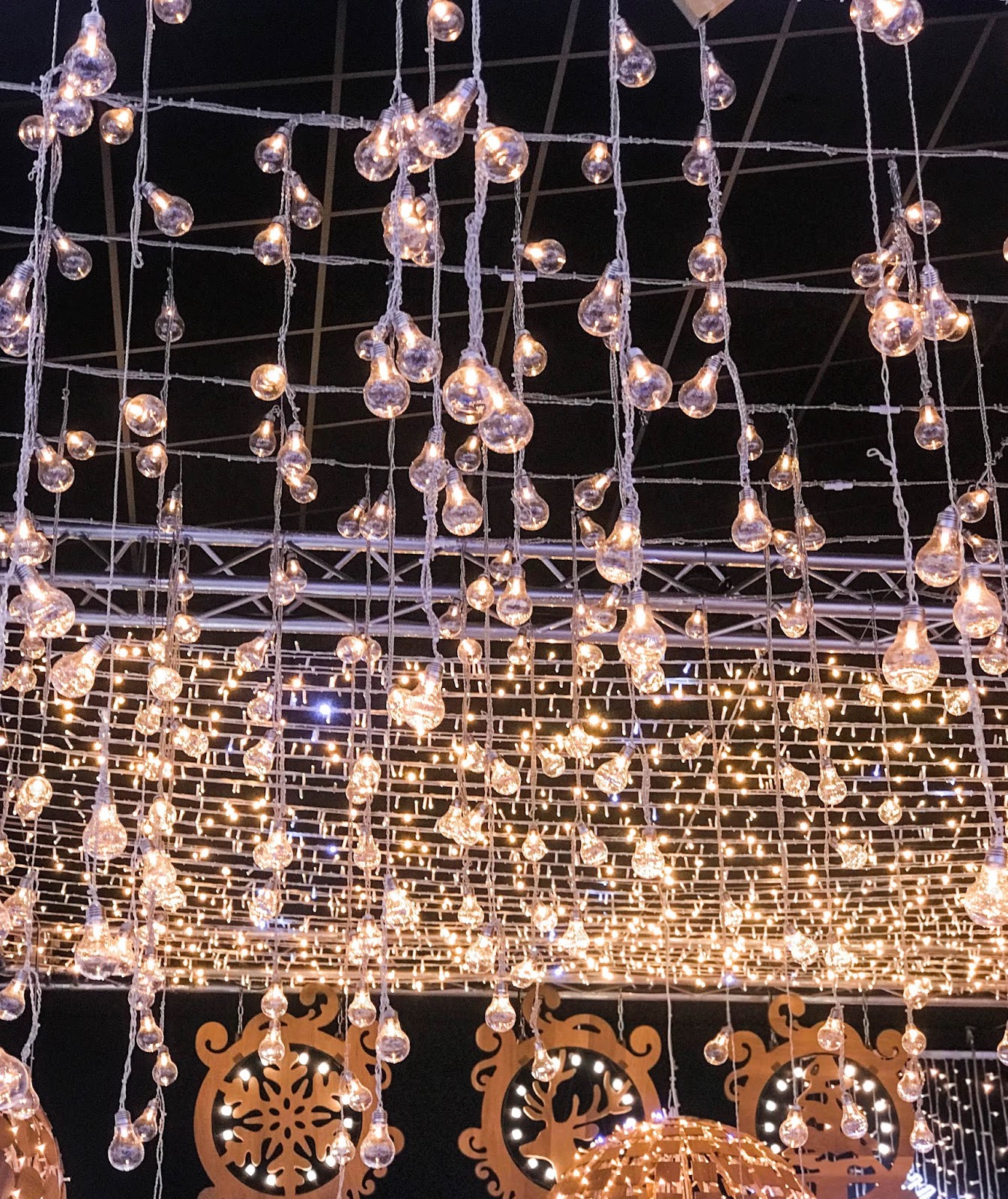 L’Isle-sur-la-Sorgue
Sundays were generally the quite day on the trip and this Sunday was no exception. We slept in late and then traveled to L’Isle-sur-la-Sorgue for brunch and an afternoon wander around their local street market. It was rather dismal weather –rainy, cold and grey– but I find it to be a lovely way to spend a few hours. Once I wrapped myself farther into my coat and pulled my scarf over my head, I was more than content to browse through the locally sourced products and explore the tiny Christmas market that carried the smell of hot coffee and sweet treats. 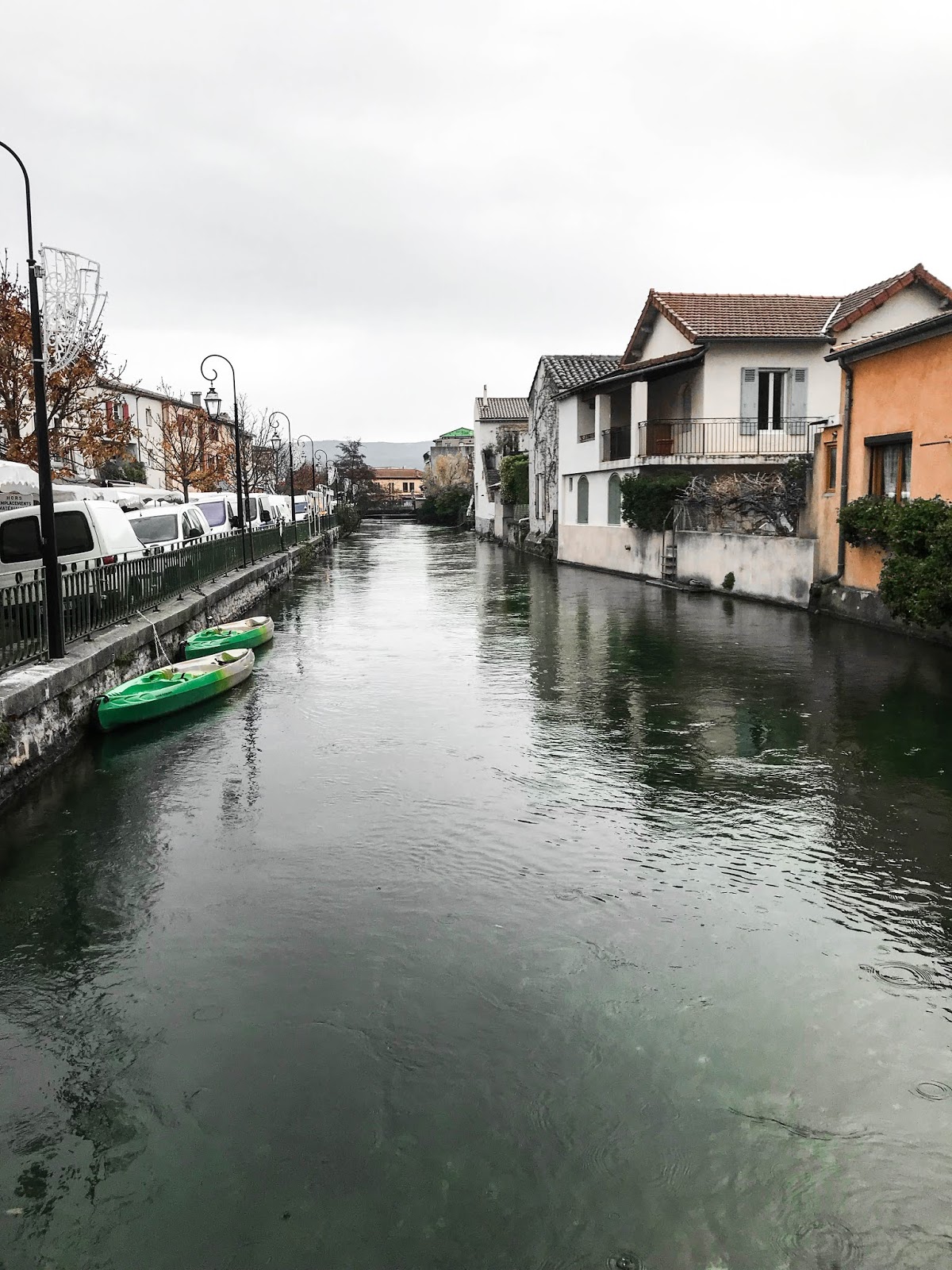 The rest of the evening was spent agonizing over how I managed to accumulate so much stuff and toggling with the age-old problem of fitting 10 pounds in a 5-pound bag. Eventually, I managed to fit everything I had into my small suitcase, duffle, and backpack and the next day, we departed for Paris, the third and final leg of our glorious trip.